Our Banjima Rangers have travelled across Banjima Country over the past three months for prescribed burns, feral cat trapping, rabbit control, and fence removal.

This vital work forms part of the targets within the Banjima Yurlubajagu Strategic Plan — Banjima's vision for country and culture — which is managed by Banjima Country Management (BCM).

Our Targets this Quarter

Banjima Wellbeing:
Banjima children and grandchildren have good knowledge of bush ways, language and stories, and there is a continuation of Elders passing knowledge on.

Bush Plants:
In 10 years Banjima country is known to have greater abundance and health of bush plants.

Manggurdu:
In 5 years Manggurdu (Fortescue Marsh) has better habitat quality and greater abundance of water birds than in 2016 with no further mine development impacts intruding on the Marsh. In 10 years the Manggurdu condition and diversity of species in river bed and surrounding floodplain are improved from conditions in 2016.

Our Work this Quarter (Based on Our Targets)

Banjima Rangers, in partnership with WA’s Parks and Wildlife Service (PAWS), have been using motion-activated cameras to monitor the extent of feral animal activity within the ecologically-important Manggurdu.

In early July the Rangers took part in one of the largest Eradicat baiting campaigns in the region, helping prepare and deploy 77,000 feral cat baits across 154, 000 km2. Cats, as well as rabbits, are widespread throughout the Pilbara and continue to pose a serious threat to native animal species and plants.

Banjima Rangers and PAWS treated around 800 hectares in the Manggurdu. This controlled burning is a key part of BCM’s healthy country plan and helps protect fire-intolerant species like snakewood and mulga from wildfires starting in the Hammersley Range and nearby mining developments.

Banjima Rangers and PAWS have worked since June to remove and reuse old fences left on the Manggurdu in a bid to protect native wildlife on Banjima Country. This type of old fencing can be very damaging to birds, emus and vulnerable species like the endemic Pilbara ghost bat (Macroderma gigas), which can become entangled in the barbed wire.

BCM is aiming to develop and deploy a plan for wildlife-friendly fencing in the Manggurdu that will be more visible to birdlife and easily avoided by the vulnerable ghost bats. 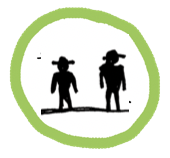 BCM is in the process of expanding its Banjima Ranger team and will be deplying its first Remote Rangers in October. This program provides capacity building opportunities for many in the Banjima community and gives a unique opportunity for many to connect to Country — no matter where they live in WA.

Our Upcoming Work in September-October